By CCN.com: Tuesday afternoon saw Bitcoin, Ethereum, and Bitcoin Cash post minor against against the backdrop of a tepid crypto market recovery. Bitcoin SV continues to teeter on the brink of being the only major Bitcoin variant to not rank among the top 10 cryptocurrencies by market capitalization, closing out the period with a less than 0.5% gain.

Bitcoin’s 24-hour trading saw almost a full 1% gain after a significant drop during the middle of the day to under $3,500. At press time the Bitcoin price stood at $3,610. Stagnation appears to be the order of the day in this bear market, with some analysts predicting a drop to under $3,000 or even further south. 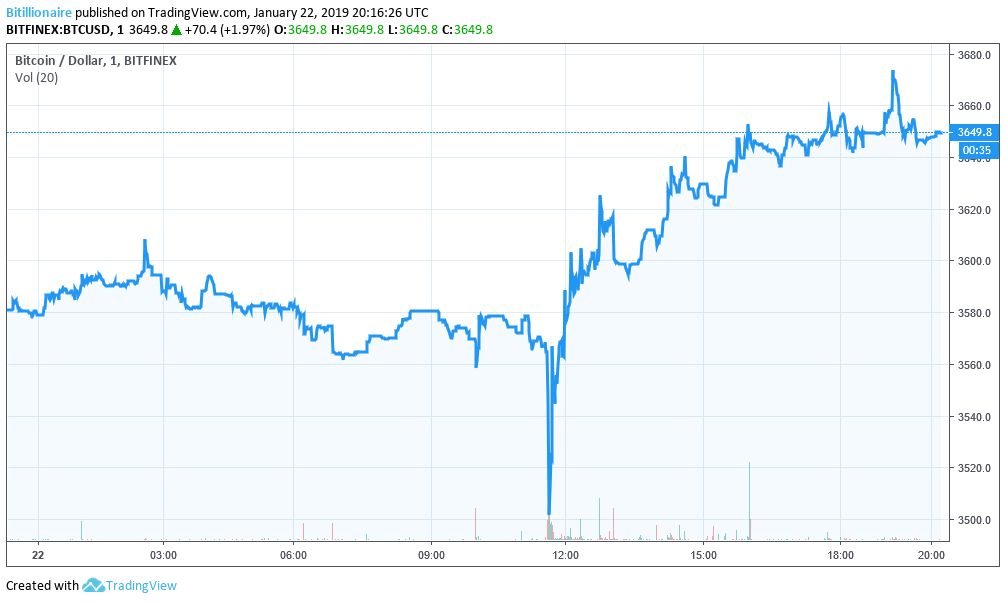 Bitcoin recovered from a low of around $3,500 at lunchtime.

The bear market may continue for several more months or even years as industry participants figure out the best use cases for cryptocurrencies. Strict payment methods like Bitcoin, which has no serious decentralization application prospects at this point, may have long-term depressions on the cards. All the same, bears and hodlers are having a great time right now with discount prices expected to continue for some time.

Earlier in January, Ethereum was up over $140 per token in anticipation of the Constantinople hard forkthat was set to introduce several enhancements to the world’s computer. The hard fork failed to launch due to security concerns, and the price tumbled an immediate 5%. 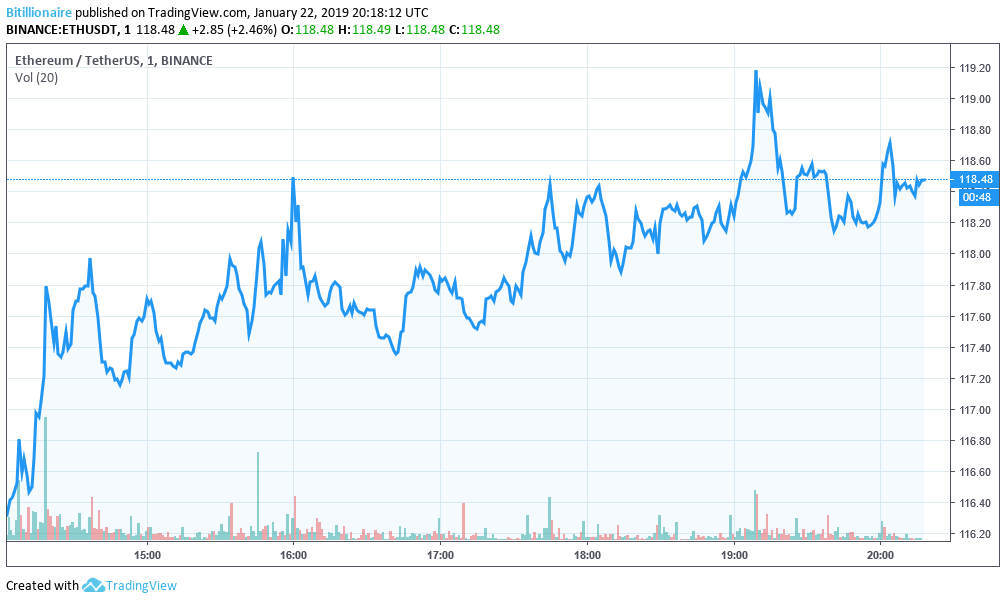 Ethereum has up to $3 arbitrage opportunities across markets. The majority trade $118 but a couple notable markets like Bitfinex and Binance are posting $121 as the current fiat price.

Ethereum has continued to lose momentum over the interim days, but today recovered over 1%. At press time, it stood at $118 on most markets. Binance and Bitfinex simultaneously had it over $120. The pressure seemed upward with almost double the percent gains of Bitcoin.

Bitcoin Cash was the winner of the focus group today, posting gains of over 5% in the 24-hour period. Just before lunch, it dropped to as low as $116, but less than three hours later had recovered $15. 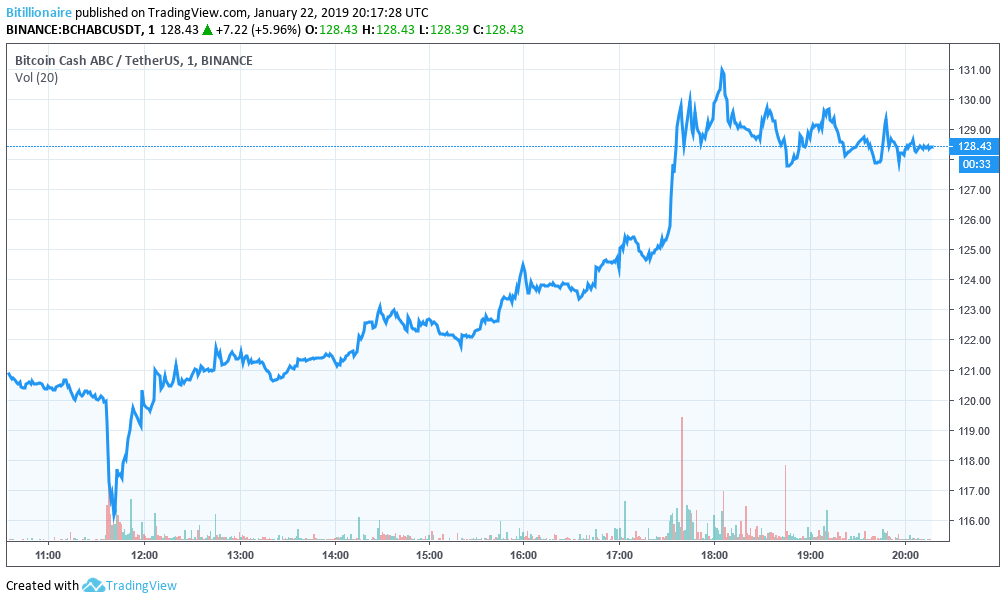 BCH saw wild trading around lunchtime, dropping to $116 and then posting a recovery to nearly $130.

At the time of writing, BCH was almost $130 per coin. The market continues to reconcile the months-old split with Bitcoin SV. As a group, the two currencies do not have the market capitalization or combined per-token price they enjoyed prior to the fork, leading some to speculate that the fork is an overall failure in a non-partisan’s view. Even adjusted for the global cryptocurrency drop during this bear market, the pair are nowhere near their pre-fork price.

Bitcoin SV May be on the Outs

Bitcoin SV’s development goes as planned, but the third-rail Bitcoin still seems in price discovery mode. Transaction volume on the network was recently stimulated by the development of several APIs, including this immutable chat client. 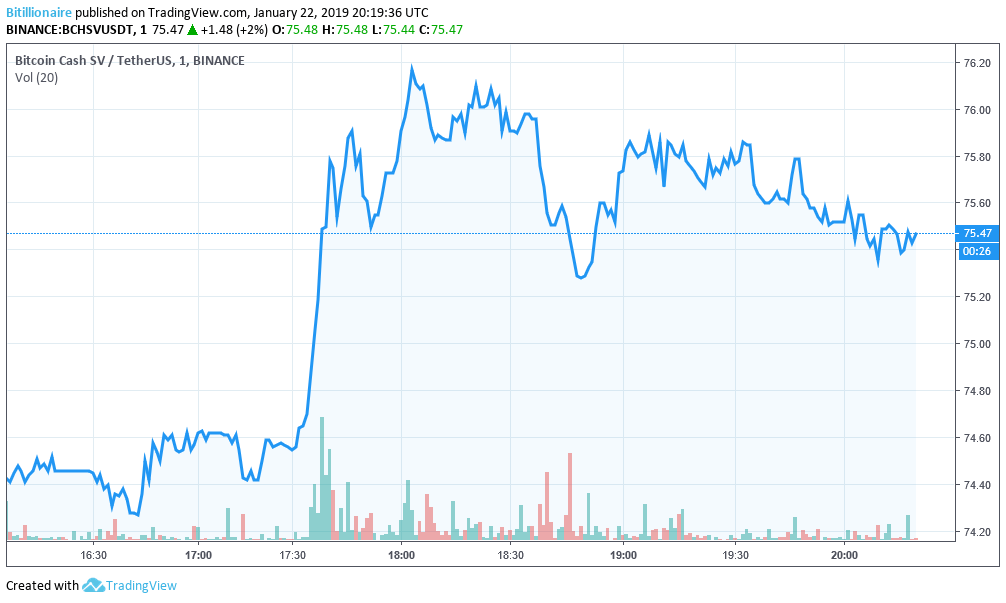 BSV currently is threatening to exit the top 10 cryptocurrencies by market capitalization, a slippery slope which could lead to further downward pressure. Its market capitalization is a mere $200 million higher than #11 Cardano. Either a further loss on BSV’s part or a quick gain on the part of ADA could flip the tables and create a trading spiral for Craig Wright’s chosen Bitcoin.