Christmas came late for the bears, but Santa didn’t fail to deliver. Nearly all of the top cryptocurrencies stumbled by multiple percentage points, everything from Bitcoin down to Zcash. Unsurprising, demand for stablecoins rose and they were trading at a slight premium.

Bitcoin Loses Over 4% Over 24 Hours

When the Bitcoin price is as high as it is, a single percentage point is worth more than $30, so even a shift of 2% is notable. At time of writing, Bitcoin was trading under $3600. Earlier in the week, it was thought that the godfather cryptocurrency might make it back over the $4,000 line, but things broke the opposite direction. 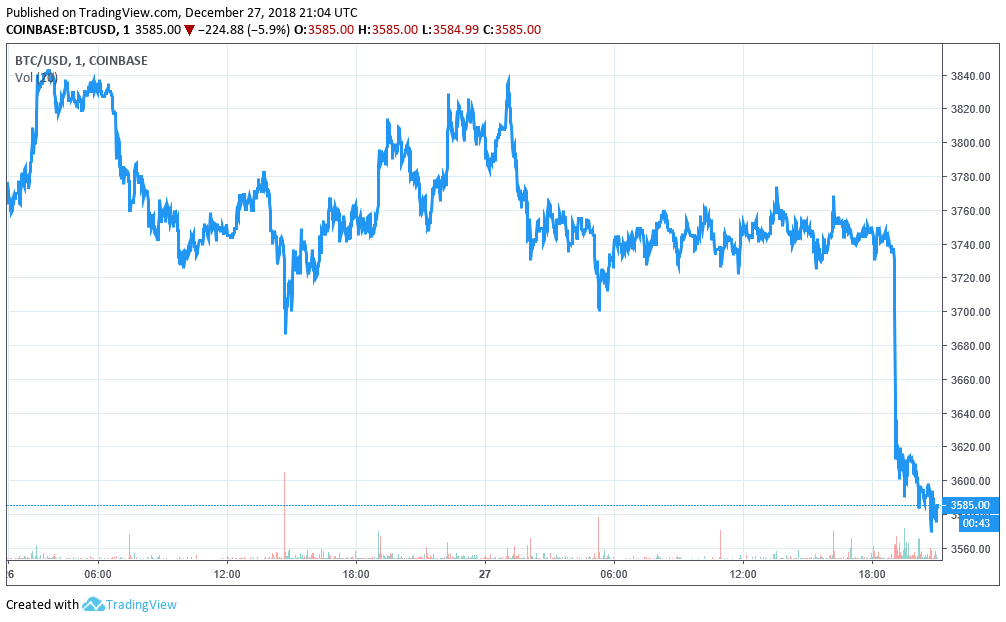 Earlier in the week, it was thought that the godfather cryptocurrency might make it back over the $4,000 line, but things broke the opposite direction. Chart from TradingView.

There is speculation afoot that tomorrow’s expiration of more than 25,000 worth of Bitcoin futures on Deribit is fueling the downturn.

Tomorrow is the largest expiry of the year for bitcoin options – the "Dec expiry". 25,500 bitcoin options will expire on Deribit ~ nearly $100mln of notional. 80% of options expiring are calls. Open interest below will mechanically drop by more than 50%. pic.twitter.com/wNmH3eOZBT

As the above tweet points out, this will cut open future interest in half. People may be selling on the news in the belief that demand for Bitcoin might drop when these options mature, while sell pressure might also increase.

The rest of the cryptos trade against BTC in virtually every single market where they are traded, so a lowered value of BTC normally lowers their value unless or until something corrects the trend. The changes are not mathematically exact, however, and often positive trading in altcoin markets can lead to lessened losses.

Ripple’s price has lost about a nickel over the past 24 hours. Confidence in the bank-friendly blockchain platform remains high across the board, with Ripple CEO Brad Garlinghouse recently making statementsto the effect that Ripple is overwhelmingly a decentralized platform. 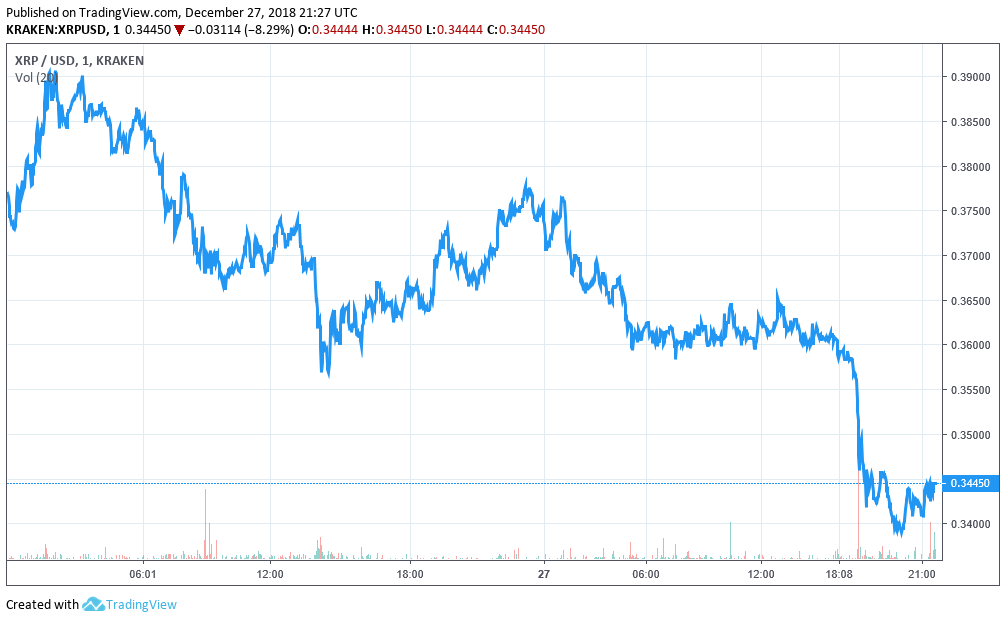 Confidence in the bank-friendly blockchain platform remains high across the board, with Ripple CEO Brad Garlinghouse recently making statements to the effect that Ripple is overwhelmingly a decentralized platform. Chart from TradingView.

Ripple enjoys a strong community and as time goes on its price has divorced increasingly from its BTC peg, with more markets adding it as a base pair and trading it against fiat currencies. This could in the future result in more price stability for Ripple.

In the case of Ethereum, the charting was almost precisely parallel Bitcoin, however: 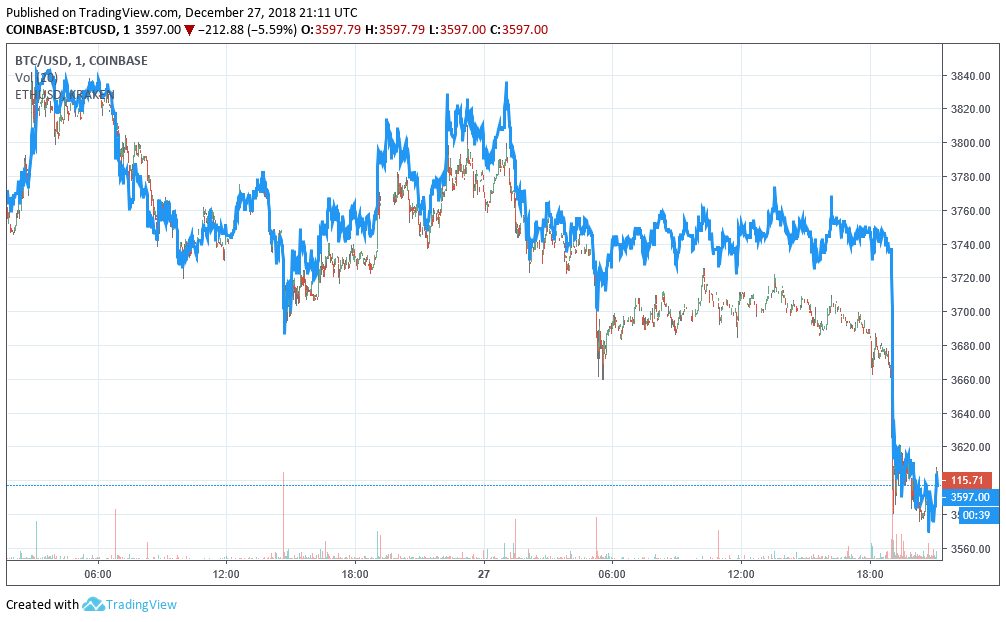 The charting was almost precisely parallel Bitcoin. Chart from TradingView.

Ethereum saw a drop from a 24-hour high of over $130. It had recently overtaken Bitcoin Cash in terms of price, but Bitcoin Cash bulls in more recent days have caught up with Ethereum and surpassed it yet again. The overall loss to Ethereum’s price is around 10% over the past 24 hours.

It still maintains a higher market capitalization than Bitcoin Cash, standing at time of writing at nearly $2.6 billion. 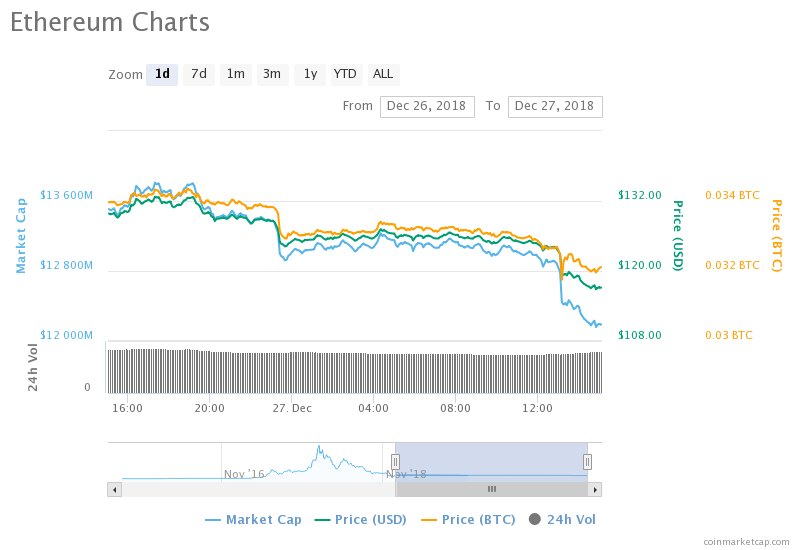 Bitcoin Cash Down More Than 12%

The 24-hour period started with Bitcoin Cash trading above $180, but by the end of it sellers would be lucky to get just over $150. 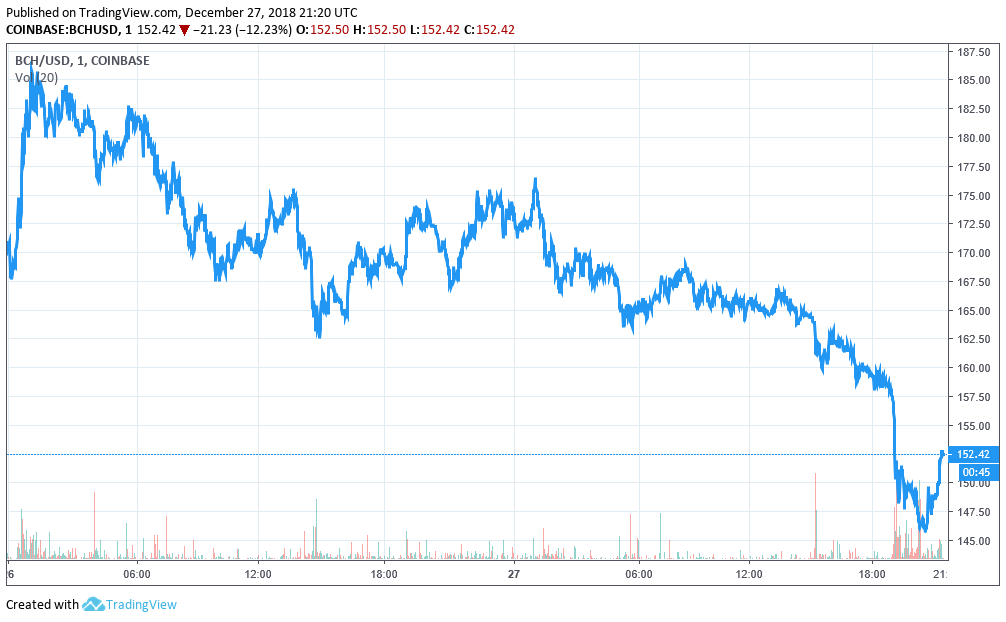 BCH has lost $30 over the past 24 hours. Chart from TradingView.

It’s unclear what drove the resurgent demand in Bitcoin Cash. One thing that is certainly clear is that the Bitcoin fork has yet to recover from the essential split in value it suffered when Bitcoin SV forked off and created a new blockchain.

Stellar has been back and forth at the end of the 24-hour period, seeing a brief climb back to nearly 11.5 cents and then trending back downward. 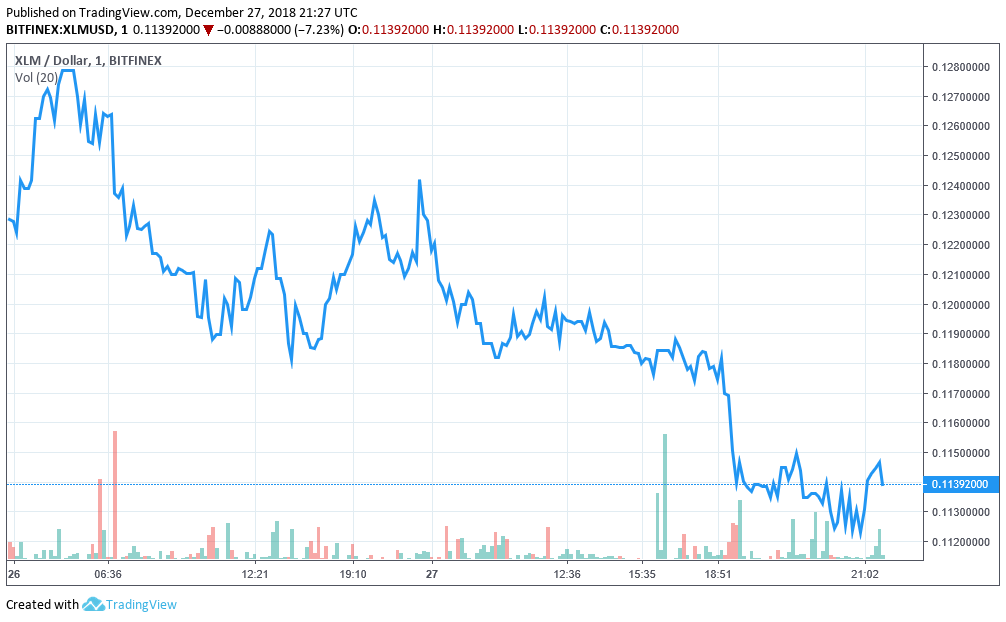 Ripple had a market cap of twice Stellar’s at time of writing, around 40 billion to Stellar’s 19 billion. Chart from TradingView.

The Ripple fork has never yet overcome its predecessor and always seems to trade around 1/3rd of its value. Significant improvements to its business relationships would be required to increase the value. Both tokens suffer the curse of massive supplies in the billions, meaning that small changes in their per-token valuations multiply into wider changes in the market capitalization overall.

Ripple had a market cap of twice Stellar’s at time of writing, around 40 billion to Stellar’s 19 billion. Neither is anything to scoff at, of course, being that they could fit several of the tokens just a little lower on the rankings several times over.