Ebit hash rate is not up to standard

Fault description: During the initial online operation of the miner, if the miner's hash rate does not meet the standard, the following aspects can be used to troubleshoot and locate the fault for later processing and resolution;

After the miner is online, it is repeatedly refreshed in "Cross-Gateway Usage." There is no problem checking the hash board, control board, fan temperature, and average hash rate, but the hash rate still cannot be increased. At this time, the device can be selected and the device frequency can be reduced. Re-refresh and the hash rate returns to normal. Re-modify back to the original device frequency (the frequency is set for different devices and the parameters cannot be communicated). Equipment failure returns to normal; under normal circumstances, several directions will cause the problem, such as insufficient power supply (the possibility of official power is slight), excessive current when the miner starts, causing the miner to temporarily crash (temporary frequency reduction) Increase the hash rate, and then increase to the factory frequency), etc.;

Note: After modifying the frequency, the device needs to be restarted.

Note: There are many possibilities for abnormal hash rate: fan failure, frequency reduction due to excessive temperature, hash board failure, poor channel contact, etc. When a fault occurs, you can import the device in "Cross-Gateway Usage" to view the overall status of the device, and when it is determined that the hash rate is refreshed multiple times, the following faults can be checked;

Usually, the two fans operate online. The fan speeds are almost the same. If a fan speed is 0, there will be individual fan damage failures; 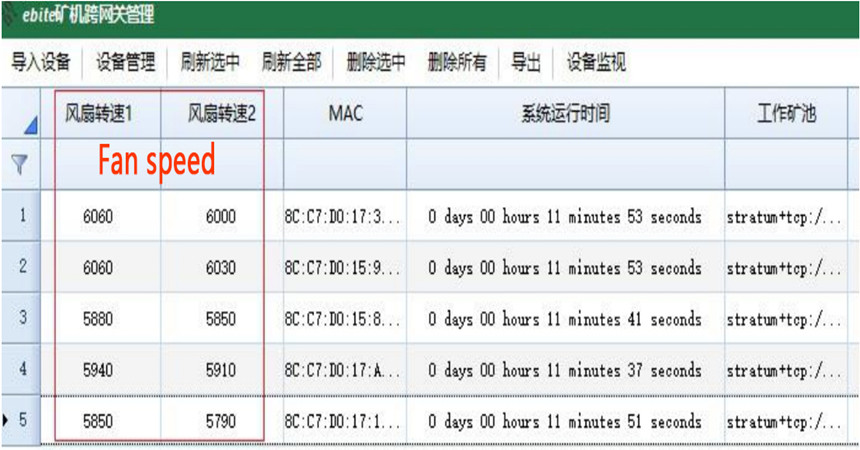 Usually, when the temperature is too high, and an over-temperature alarm will be generated in the network management assistant. As shown in the figure, the operating temperature of each hash board is displayed. This is an example of generating an alarm. If it is left unprocessed for a long time, it will cause the device's frequency to decrease.As a result, the equipment's hash rate is not up to the standard failure; 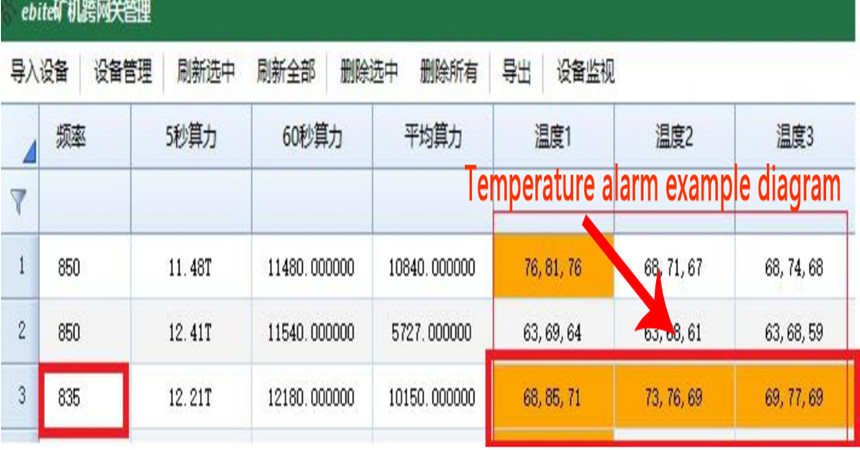 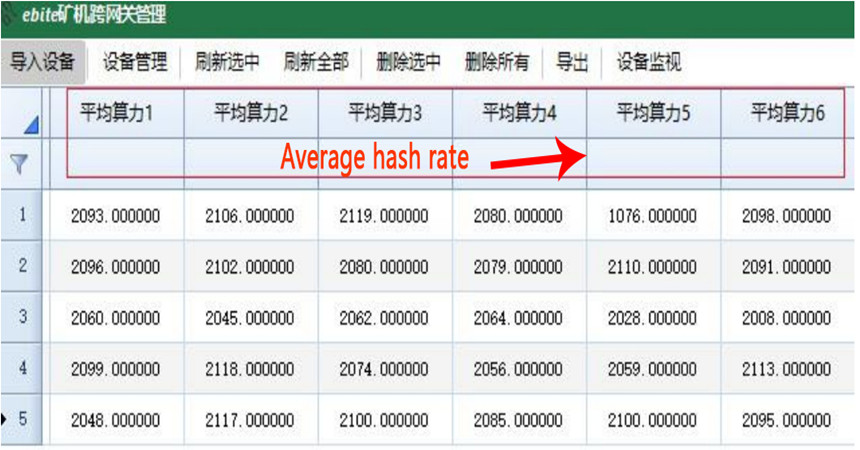 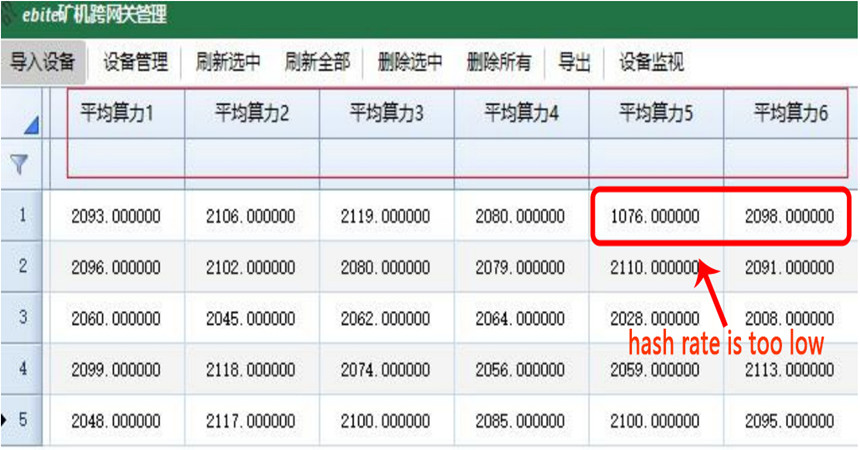 Some miners did not configure the official power supply when leaving the factory, resulting in a low hash rate for some customers' external power supplies, automatic shutdown of miners after running for a while (the power supply was insufficient) and some hash boards cannot reach standard computing power; the details are shown in the following figure:

At this time, we first confirm whether the hash board is working correctly. If it's just that the hash rate can't reach the standard hash rate, we can initially determine that the power supply is insufficient. We can try to reduce some of the frequencies for testing to adjust the best hash rate (in this case, run at a reduced frequency). Which can guarantee the maximum hash rate and reduce the power consumption of the equipment at the same time);

4. The hash rate is zero

Some miners have displayed a zero hash rate after multiple refreshes. This requires attention to the following aspects:

1) The settings of the mining pool and miner; check whether the two settings are wrong, it is recommended to use other mining pools for testing;

3) The network delay is too long; you can test the gateway and DNS in DOS to check whether there is any packet loss;

This leads to the leakage of power from the hash board, and eventually, the hash board's hash rate is insufficient (this problem is only for fault judgment, and can be sent to The nearest repair center or replace with a new hash board, brush the anti-leakage coating);