1. The temperature of the maintenance air gun and the waveform diagram of the oscilloscope 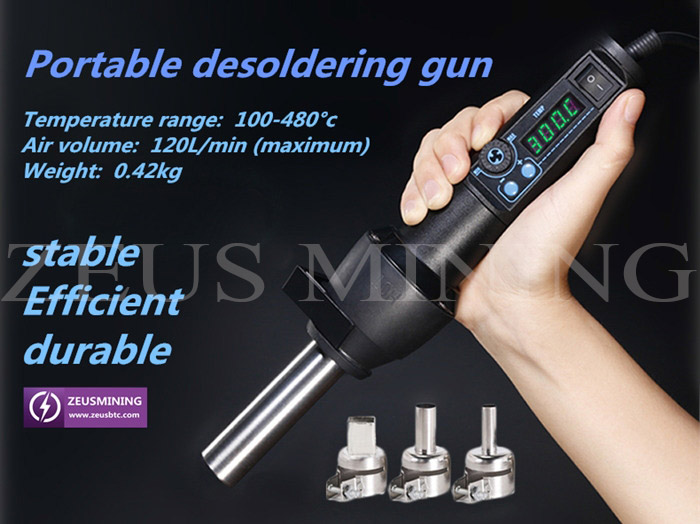 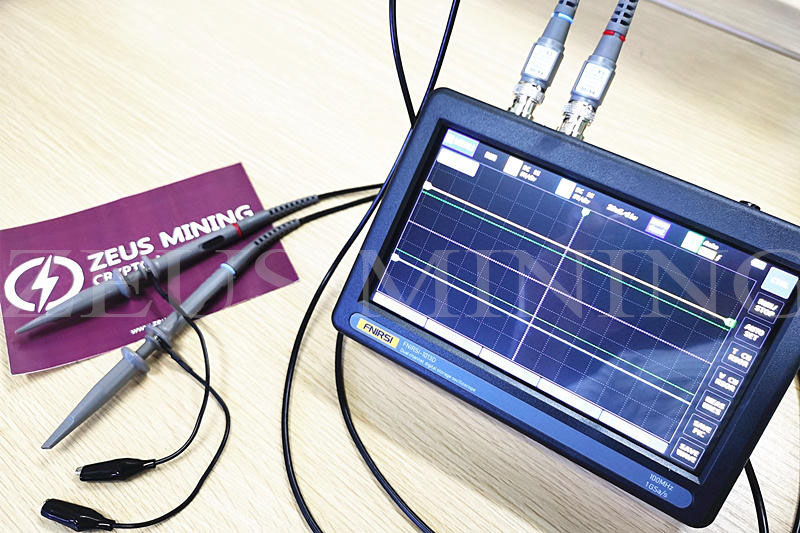 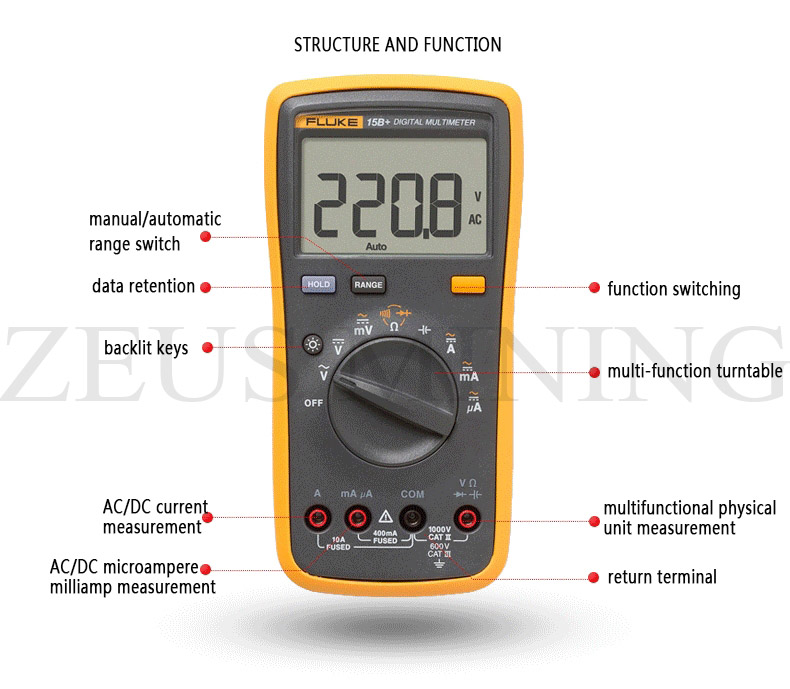 4) The amount of Antminer thermosetting adhesive and how to use it:

Pick an appropriate amount of thermosetting adhesive on the bottom of the heat sink, then stick it to the IC of the hash board and straighten it, turn on the desoldering gun to adjust the temperature to 250 degrees-300 degrees, blow it against the heat sink for 5 minutes-10 minutes, and then the fan will cool. 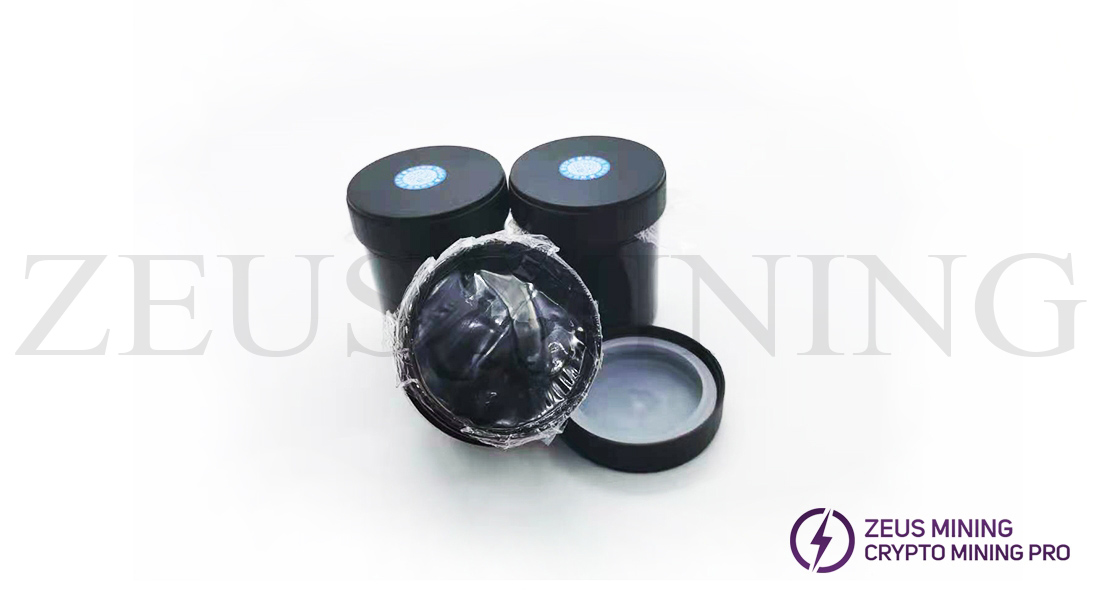 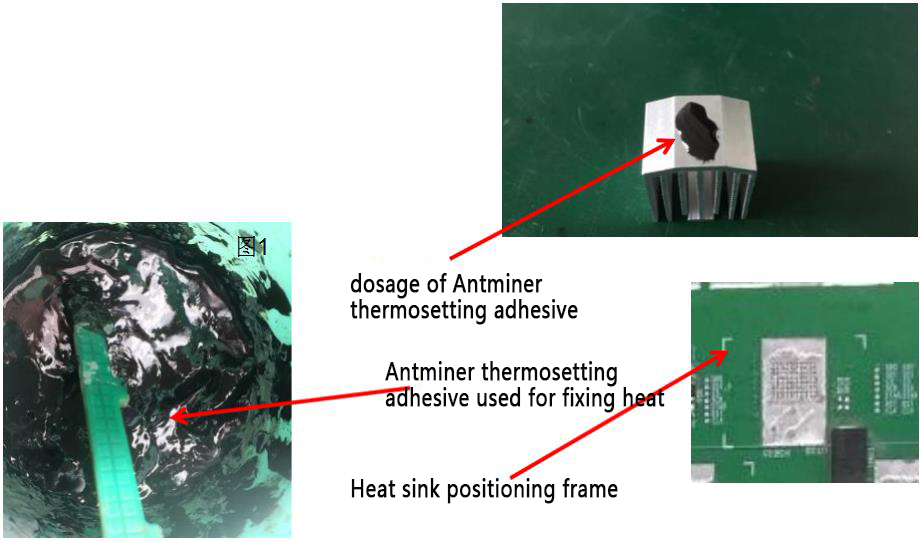 2. Explanation and elimination of common failures of the whole miner

1) Hash board heat sink is incomplete

Use the test tool putty to test the abnormal hash board.

b. If the test result shows pass, it means that the hash board is OK, and the faulty parts can be located one by one for the power supply/control board/data cable. If the power/data cable is replaced and the fault still exists, the control board needs to be repaired.

a. First restore the control board to factory settings or erase and re-burn;

b. If re-burn is invalid, you can use the test tool putty to test, locate the faulty hash board and repair it;

c. Test the three hash boards all show pass. You can try to replace the power supply and then restart.

3) The network is abnormal

Observe whether the network portlight is always on

a. If the network portlight does not light up, check whether the network port is blocked by foreign matter or dirt. If the fault still exists after clearing, you need to repair the control panel;

b. If the light is on, you can try to press and hold the IP set button for 8 seconds to restore the factory settings and search for the IP again to connect.

4) The whole machine is not powered on

a. Replace the power supply;

b. Replace the control board;

c. The hash board is short-circuited, and the three hash boards can be pulled out for power supply to check one by one.

5) The temperature of the miner case is too high

Check whether the front and rear fans usually rotate or whether there are foreign objects blocked.

3. Explanation and troubleshooting of common faults of the hash board 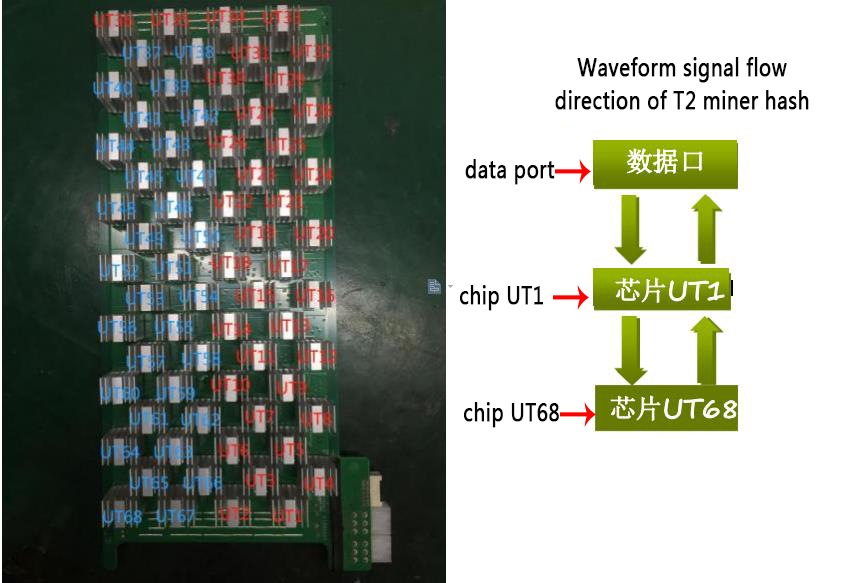 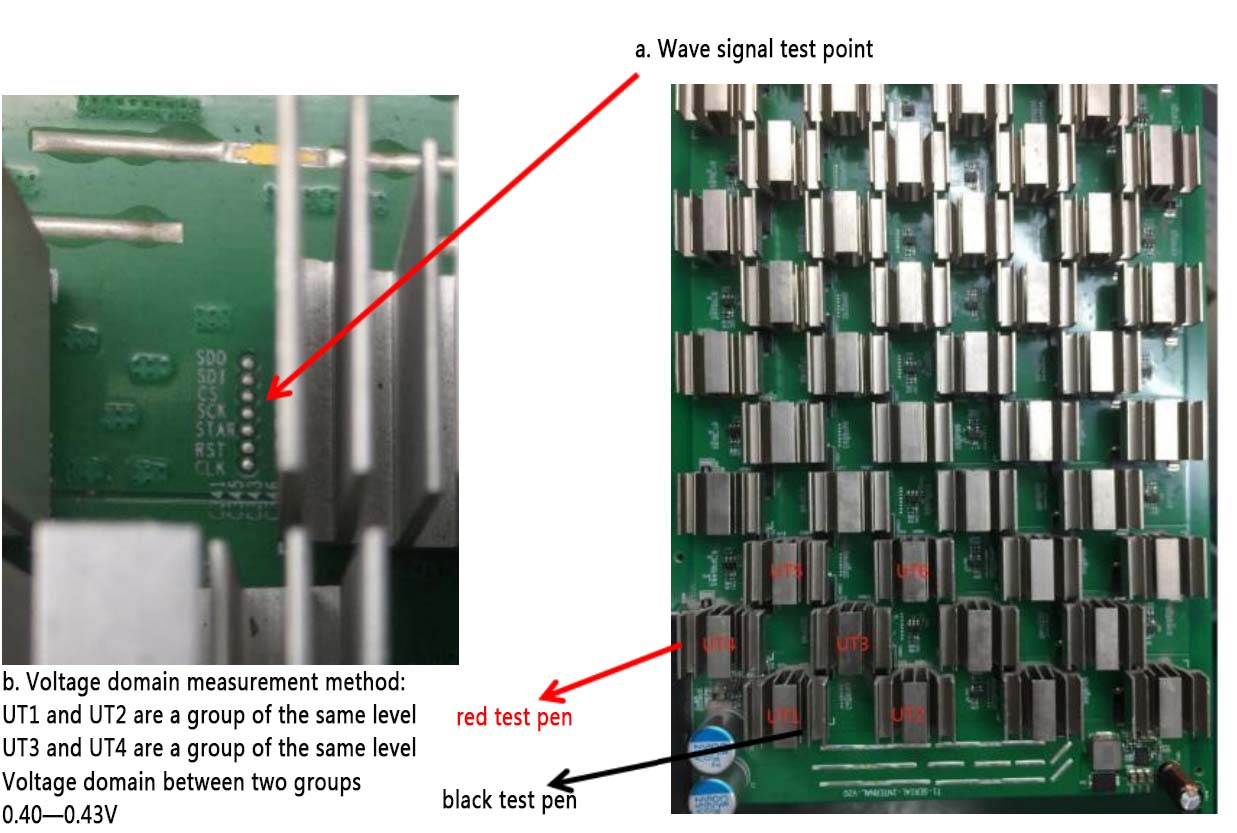 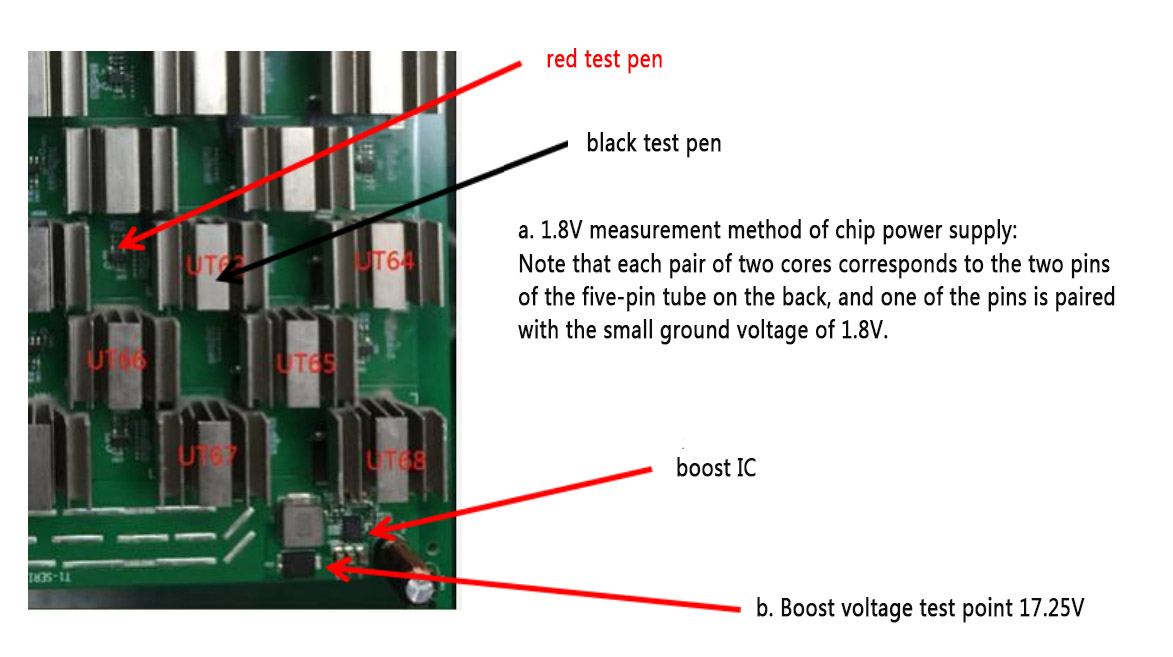 a. If not, use an oscilloscope to measure R61; if there is, UT1 may be wrong or false welding;

If not, measure whether the U38 output pin has a clock power supply of 1.8V; if so, replace the clock Y1;

b. If UT1 has a clock signal output, measure the voltage domain of each group of two chips at the beginning of UT1. The average value is about 0.45V. If the voltage value is 0.25V, note the position of the group that is lower than 0.18V.  After changing one of them at will, the voltage can be increased. If there is no increase, then you can replace the other one in this group.

c. If UT1 has a clock signal output, and there is no one set of voltage domains lower than 0.18V, pay attention to whether the voltage domain of the abnormal group is around 0.27V. If the next group of voltage domains is normal to the following groups, It can be determined that there must be a five-pin tube burned out near the front and back of the set of sudden voltage changes. The output voltage of the five-pin tube is about 0.6V. Usually, it is 1.8V. Then a replacement is OK.

The XX chip is less core, replace the chip. (Such failures are less)

The total core on the board is small. Check whether the total voltage of the circuit board is abnormal (refer to the method in E0 error). If there is no abnormality, the Hash board needs to be repaired or replaced with a new one. (Such failures are less)

The XX chip softbist has a high error rate. Replace this chip.

The XX chip pll is not locked, replace the XX chip or the XX-1 chip.

The temperature of the XX chip exceeds the standard, replace the chip. (Such failures are less) 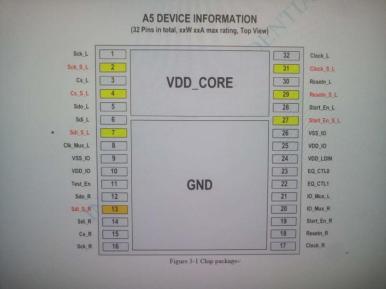 Main points of hash board repair

There are several necessary measurement reference voltages for the hash board, as follows:

First: LDO five-pin tube output voltage 1.8V (the failure point of each voltage may be caused by the burning of the two chips of the voltage supply or the short circuit of the capacitor next to the chip. The five-pin tube itself is burned out, and it can be replaced.)

Note: There is a possibility that the test point will be connected to the point or the chip pin will be disconnected, or even the test point will be directly short-circuited to the ground. Check each possibility carefully with the waveform signal. The CLK and CS signals are the necessary condition signals for the chip. The CS signal is at the lower level of the wave device, so this signal is often ignored, and the failure point becomes its key factor.

4. Explanation and troubleshooting of common faults of control board 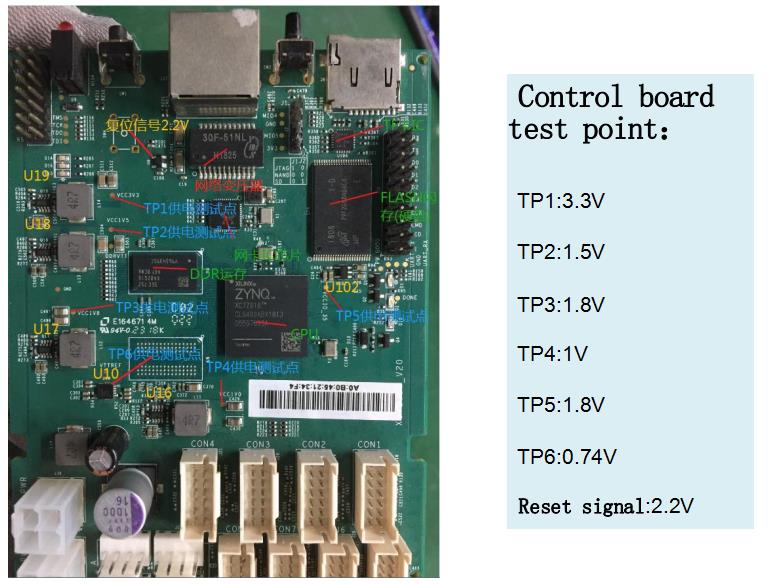 Main points of control board repair

A. First, try to erase and reprogram the control board and eliminate the possibility of software failure.

B. Check the TP1-6 test points of each power supply output of the control board hardware, whether normal or grounded.

b. If TP1 3.3V is grounded, it is related to CPU U10 U102, FLASH flash memory, and network IC chip and can only be removed one by one and troubleshooting.

c. If TP3 1.8V is grounded, it is related to the CPU and network IC chip, and it can only be removed one by one and excluded.

d. The power supply is standard. Check whether the clocks Y2 and Y3 on both sides of the CPU have signals. If there are signals, the failure of the CPU, FLASH flash memory, and DDR will cause this fault. Replace them one by one to eliminate.

2) The network is abnormal

b. If the light is on, measure whether the L10 inductor has a 1V voltage. If not, you can try to replace the network transformer or the network card IC chip.

A. Check whether the CON data port is dirty or blocked by foreign objects.

b. If the resistance to ground is standard, you can take the hash board corresponding to another normal channel to cross-validate. If OK, it means that there is a problem with the channel's hash board, which has nothing to do with the control board; if the fault persists, you can try to replace the CPU (U5).

The content of this article is from the Internet, compiled and edited by ZEUS MINING.